The notion of “eyes on the street” generally assumes that the more people there are on a street the less opportunity there is for crime to occur. Therefore, one of the easiest ways to deter a significant amount of crime is to have a constant presence of people acting as a sort of surveillance for the neighborhood. This is accomplished by having a mix of commercial and residential uses on a street, thus promoting a street ballet at all hours of the day and night. As Jane Jacobs wrote in her seminal book The Death and Life of Great American Cities:

“There must be eyes upon the street, eyes belonging to those we might call the natural proprietors of the street. The buildings on a street equipped to handle strangers and to insure the safety of both residents and strangers, must be oriented to the street. They cannot turn their backs or blank sides on it and leave it blind. And third, the sidewalk must have users on it fairly continuously, both to add to the number of effective eyes on the street and to induce the people in buildings along the street to watch the sidewalks in sufficient numbers. Nobody enjoys sitting on a stoop or looking out a window at an empty street. Almost nobody does such a thing. Large numbers of people entertain themselves, off and on, by watching street activity.”

The idea of eyes on the street makes sense to the typical urbanist, and it seems reasonable to assume it is a valid and effective theory. However, there have not been many substantial studies done on the subject. In this post, I am looking at the relationship between the density of the residential built environment (housing units per acre) and rates of crime in Chicago community areas. There are of course other variables that affect eyes on the street, such as land use, vacancy, tourist attractions, etc. but they will not be covered in this post. And, as a disclaimer, crime of course cannot simply be generalized; there are multiple complex reasons for why crime occurs and where. There are many deep rooted systematic problems that affect crime and it is a subject that is incredibly complicated and nuanced. In this post I am simply interested to see if there is any correlation that can be drawn between data on the density of the built environment and crime in Chicago.

One issue that seems to be occurring with regularity is that when home values reach a high point and people start deconverting multi-family homes to single family ones, neighborhoods become more homogeneous and lose density. This can be a problem because, in some cases, very wealthy people may have multiple homes and thus do not live in any of them full time and homes that are vacant for any significant length of time begin to turn streets into deserted blocks with little street life. I have seen this happen on the North Side in Ravenswood for example, where occasionally someone will tear down an entire house next door to transform the lot into their private yard. Instead of creating higher density and encouraging more people to live in an area, the opposite occurs. In desirable neighborhoods, it seems to me, this is happening at a high rate. But, does loss in density have any correlation with increase in crime?

As a starting point, see the below map for a general idea of density levels throughout Chicago. The map is divided by census tract (using the US Decennial Census and the US Census ACS 5 Year Estimates (2010-2014)) and based on housing units per acre rather than the more traditional people per square mile. 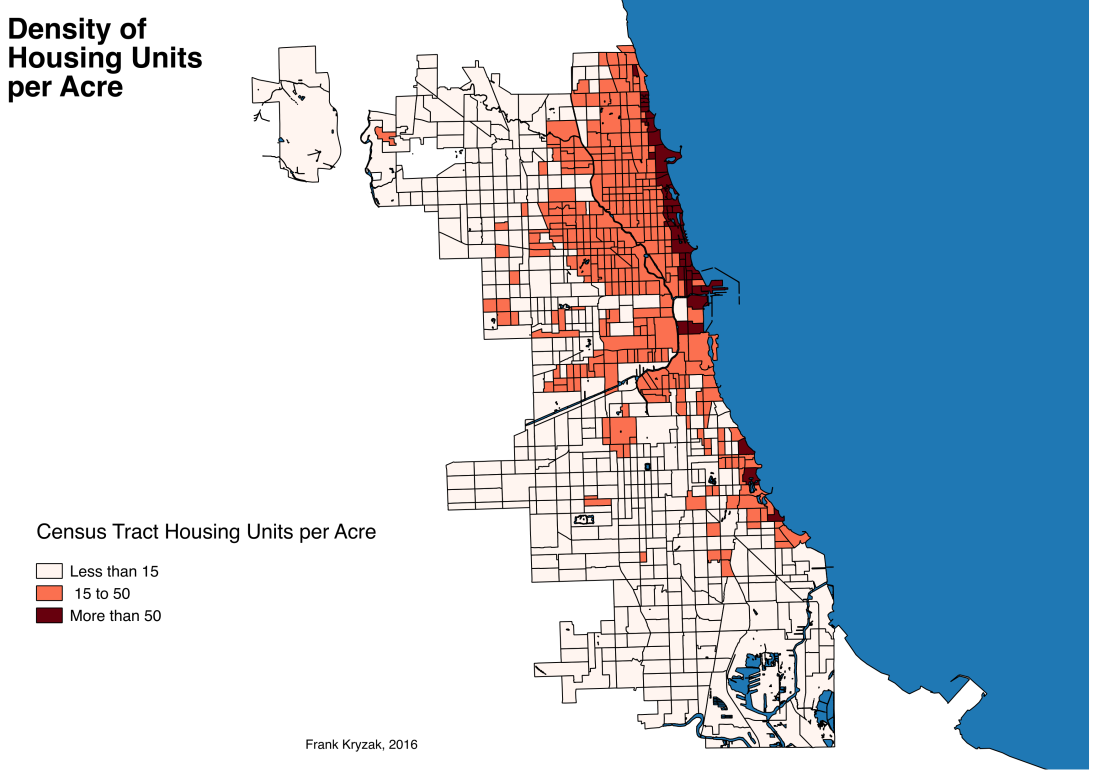 To look at the relationship between the eyes on the street theory and density, I analyzed Little Italy/University Village, a neighborhood I had spent years living in,  because I feel it is a good representation of the basic tenants that Jane Jacobs wrote about. While this neighborhood has lost people over time, in many cases due to students and professors replacing larger families, the number of housing units hasn’t decreased and there is a fairly constant presence of street life at different times of the day and night. Let’s use the Polk and Carpenter intersection as an example.

People sit outside at Carm’s, and on the sidewalk outside of their buildings in lawn chairs when the weather is favorable. Those who own and work at Fontano’s still live on the block. There are eyes on the street, and there is a mix of uses in a residential area. This sort of mixed use  is not generally supported by current zoning in residential areas.

But, is there any evidence to support the idea that this type of density and mixed use that creates eyes on the street in Little Italy/University Village can actually help curb crime?

Anecdotally, I know of someone who was robbed on Taylor Street a few years ago around 2:00 am. A resident in a nearby apartment building witnessed the crime and called the police who then found the perpetrator and recovered and returned the stolen items to the victim. Just for purposes of discussion, if that apartment building were not facing the street with no setback, or if it weren’t an apartment building at all, then perhaps no one would have heard or seen the crime, or if it were a single family home perhaps everyone would have been asleep. Of course, this is purely hypothetical, but I truly believe that no one would have seen the crime if the built environment was of a less urban, dense, mixed use character. Then again, maybe the perpetrator wouldn’t have even been looking to rob someone if it was a residential only street. Such hypotheticals are part of the problem with the lack of studies on the efficacy of the eyes on the street theory. 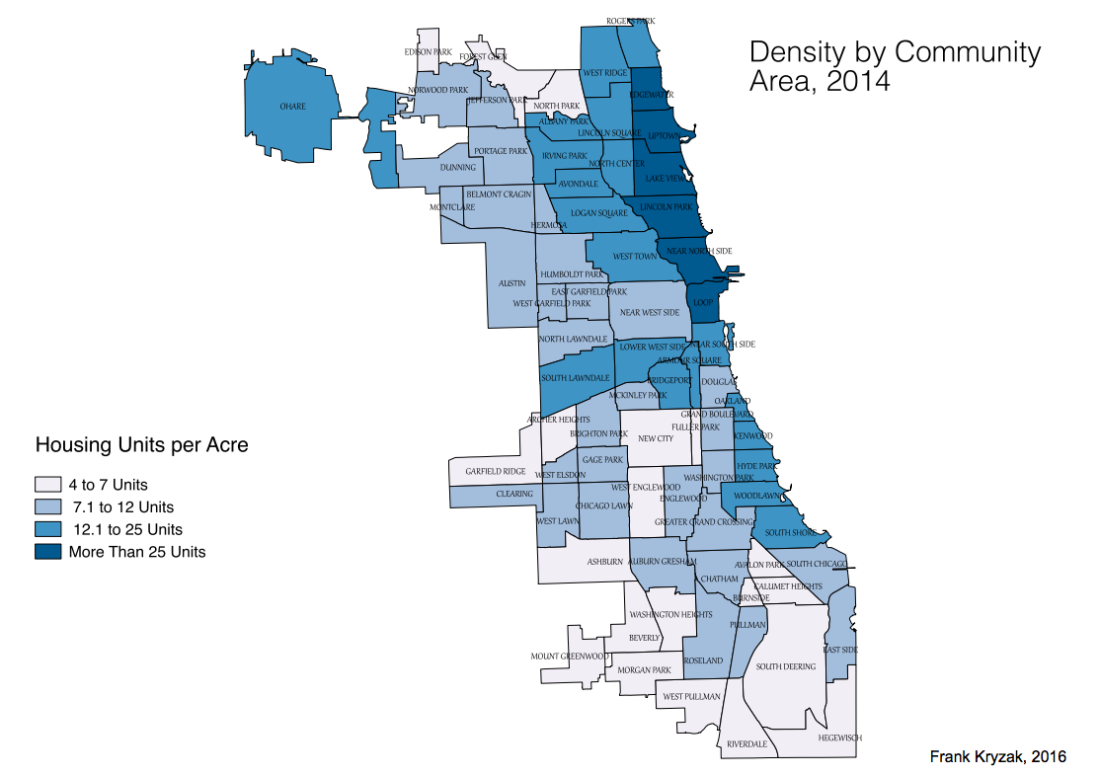 The following chart shows density, property, and violent crime for all 77 community areas. A higher resolution chart can be found here.

There is a greater concentration of high peaks for property crime in the middle of the density spectrum, with some more towards the bottom of the community areas in terms of density. The Loop is an outlier. As noted above this could be for any number of reasons, such as the high number of tourist attractions, etc. The same pattern appears for violent crime, with a concentration of peaks in the middle and near the bottom of the density spectrum. Generally speaking, many of the community areas that have a higher peak in one type of crime also have a higher peak in the other, and even though a number of community areas have very similar density, the amount of crime in many cases is not correspondingly similar.

After determining that there is weak correlation between changes in density and changes in crime when considering all 77 community areas, I was curious to look at a smaller sample of community areas that stood out (for example, the communities with the smallest and largest change in violent crime). I also added changes in household median income to see if any patterns  might be revealed regarding why there may have been a large or small change in crime. The following table shows community areas with the smallest drop off in violent crime and corresponding change in density and change in household median income (source: US Census ACS 5 Year Estimates 2009-2013):

Interestingly, while all of the community areas with the smallest drop in violent crime had a wide variance in density change, all of them had a drop in household median income of at least $6,000.

What Does All of This Mean for the Relationship Between Density and Crime?

I must admit, when I began this analysis I was not expecting to see results indicating there is weak correlation between density and crime rates in Chicago. Certainly, the notion of eyes on the street is a valuable planning theory. While the correlation between density and crime did not support this theory as strongly as I expected, this is not necessarily surprising considering the myriad of other factors that affect eyes on the street, which are beyond the purview of this analysis. Further, the theory of eyes on the street was developed by Jane Jacobs’ observations of a specific location during a specific time. Many things have changed since the theory was developed in the 1960s and each place is unique. It can be misleading to take ideas from a certain place and time and assume they will be universally applicable.

Perhaps, I will look at eyes on the street through the lens of land use in the future, because looking at density (in units per acre) may not be the best indication of how many eyes are on the street. It is also important to take in to account the type of density as well. A very dense tower that sits alone in a sea of parking or a large park will not have the same eyes on the street as a row of three-flats that bump up directly to the street. Unfortunately such considerations are not possible when simply using census data and would require additional field research. It is also possible that doing the same analysis but using density in terms of people per square mile would reveal different correlations. At this point, however, the conclusion I draw from looking at communities in Chicago, is that the density of the built environment has less to do with crime than I originally assumed.

Image at top from yochicago, all other images from Google, all maps by Frank Kryzak.